A flour dresser is used to sieve the bran from the wholemeal flour to produce white flour. Little is known about the dresser at Burton Mill other than it was installed in its present position in 1979. There remains a mystery over the direction of rotation of the millstones as the hursting (the metal frame carrying the stones), and bevel drive is set to be driven in the same direction of rotation as the turbine, but the dresser will only work in the opposite direction! It does appear that in the 1980 stone dressing (re-cutting the stone surface), an attempt was made to change the pattern to reverse the stone direction. This was confirmed by the miller at the time who always had a twist in the main drive belt. When the stones were dressed in 2017 the pattern was returned to the original so no drive belt twist is required. This should improve the flour quality but it meant that the dresser had to move. 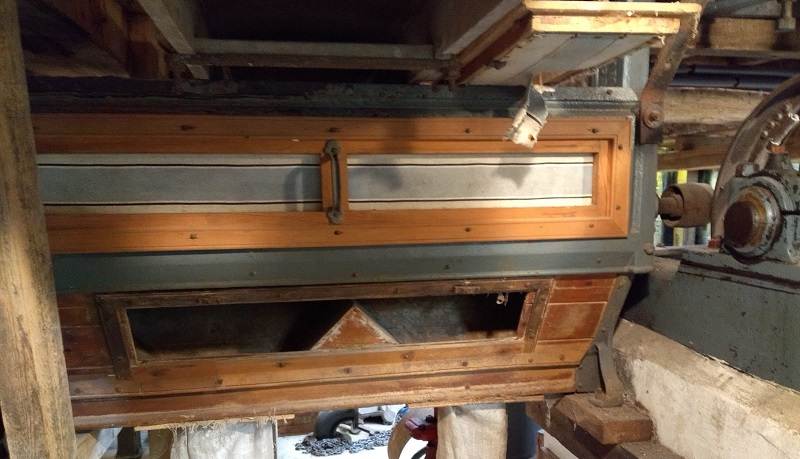 This view shows the drive from beneath the mill stones. The metal cage would have been covered by a silk cloth sieve but this has since rotted away.

Restoration begins! The photo below shows the inner workings. The main (top) spindle rotates at around 300rpm turning the helical blades which blow the wholewheat flour against the sieve cloth wrapped around the outer drum cage. A belt would connect the two pulley wheels. The lower pulley wheel drives a chain connected to the outer cage to cause it to rotate at around 30rpm. As the drum rotates it passes under a set of brushes which are attached to the length of wood at the top of the drum. The sieved flour drops to the chutes below – white flour from the left chute and ‘brown’ flour from the right. The bran stays within the drum and eventually drops into a chute at the far end. 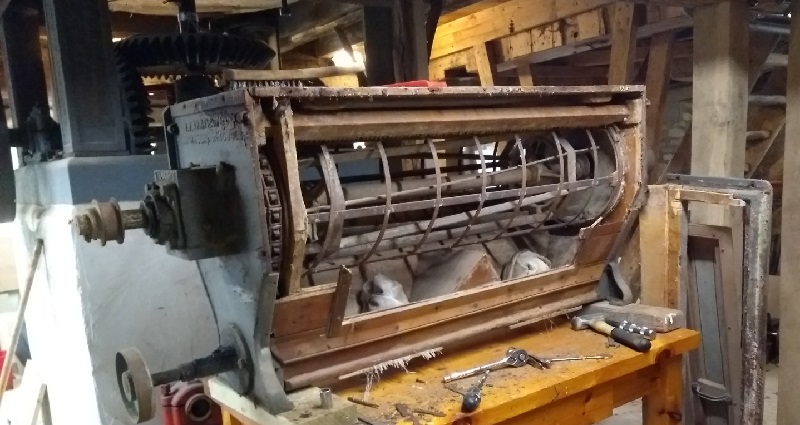 The chain drive had seized and after removing part of the white flour chute the reason was clear… Mice, with a particular liking for party poppers had been nesting here for many years. Their debris had rotted quite a few links of the chain and jammed the lower bearing. Caudwell’s Mill, Derbyshire kindly provided a few replacement links.

Further dismantling will only be possible once the outer drum is taken apart. This is going to be difficult as the 24 bolts are heavily corroded. It is hoped that most of the (very rotten) woodwork can be reused – given sufficient wood hardener and filler.

A view of the chain and drum gear. The eyelets in the piece of material clamped to the drum show that the sieve would have been laced onto the drum. An Archimedean screw in the centre collects and removes the bran. 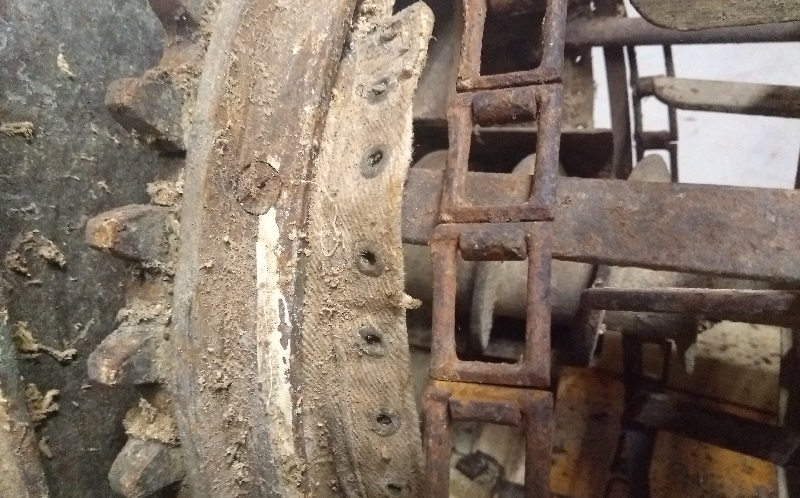 Finally, the fan is separated from the drum. These and all the other internal metal parts will be blast cleaned and painted.
This type of dresser is often referred to as a centrifugal as the fan propels the wholemeal outwards to the mesh. The rapid movement of the freshly milled wholemeal dries it sufficiently to not stick to the mesh. With other designs of dresser it is usually not possible to sieve flour straight from the millstones.

Cleaned and painted by Sussex Blast Cleaning. The paint is a food-safe polyurethane. The colour probably repels all bugs. 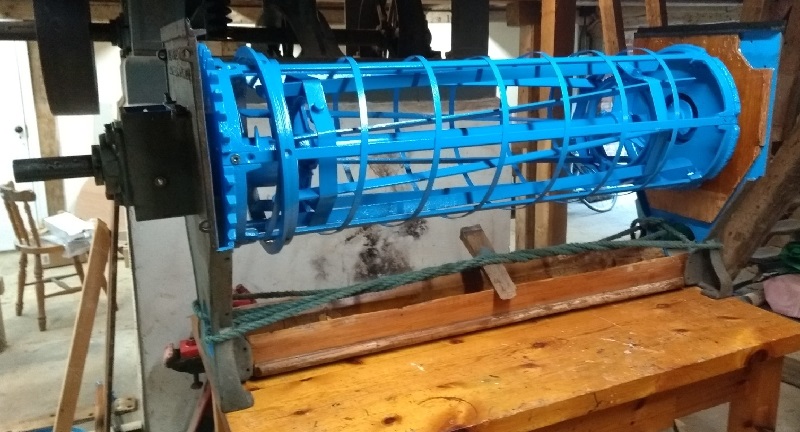 All parts in contact with the flour are painted or varnished but the exterior will be left as original as possible. The drum bearings are now lubricated with a food-safe, non-toxic grease.

The dresser has now been sited in front of the stones and could only be connected on the main drive belt side with a twisted belt. It would have been easier mounted the other way around but the drive shaft has been cut too short. Milled flour from the stones enters on the left hand side via what will be a quite contorted chute. 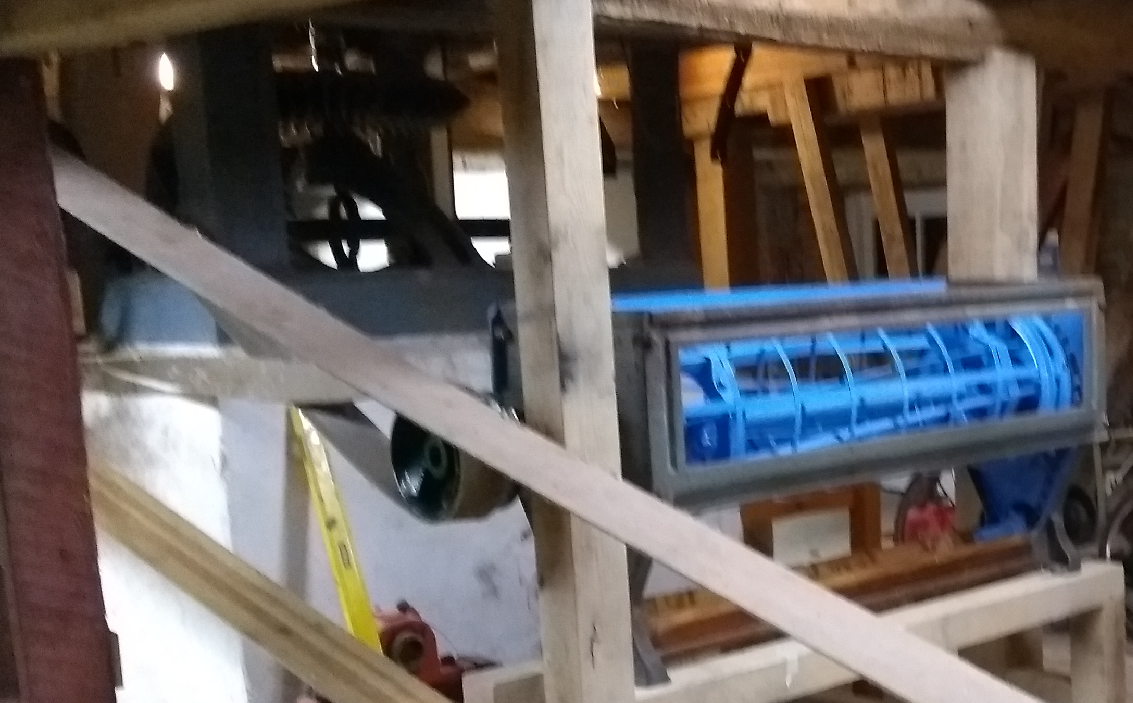 The original wooden parts of the casing have been cleaned, filled and sealed on the inside surfaces. A few parts have been modified so they can be slotted rather than screwed together which will make thorough cleaning possible. 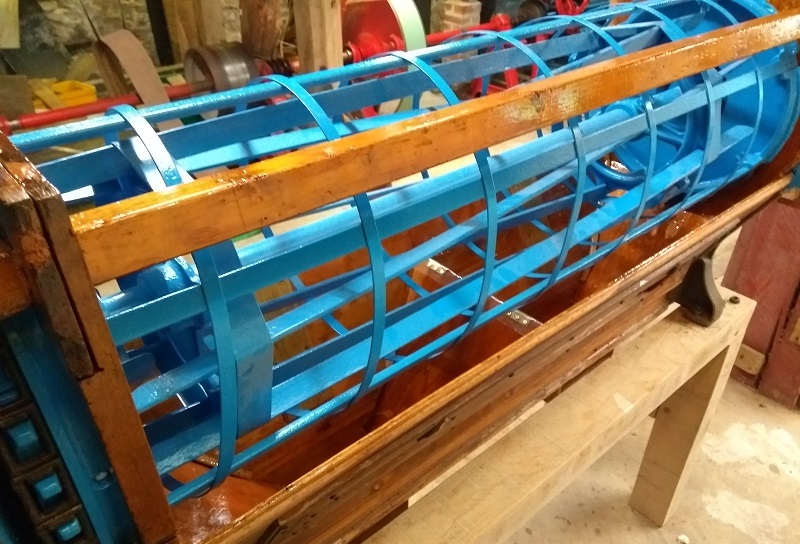 March 2020 – Dresser now covered with a nylon mesh which is laced onto the drum. The lacing will be covered over with a flour & water paste.
Originally the drum would have been covered by two pieces of silk with a join in the centre. The left hand side sieves the finest white flour with a grade 75 silk (75 holes per linear inch) and the other side with a grade 60 to pass some of the ‘middlings’. As we only intend to produce a bread flour we use a single 60-grade sieve. Including the middlings in the white flour improves the flavour but does give a slightly darker colour when baked. 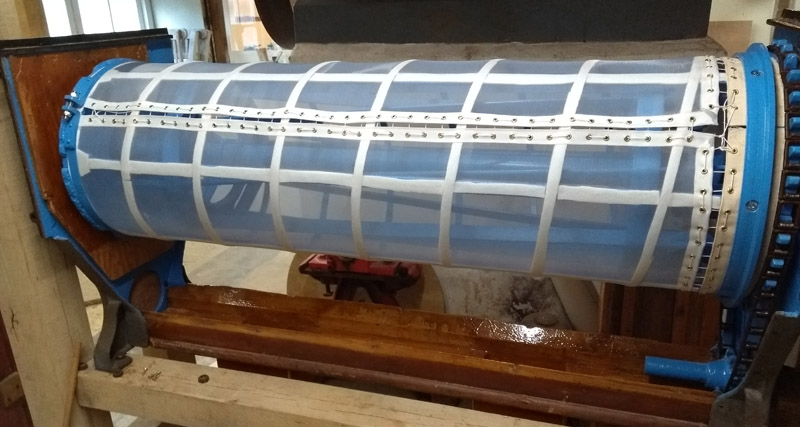 The dresser began sieving flour in March 2020, just when Covid-19 had created a shortage of flour.
Initially, the dresser would extract only about 50% white flour from wholemeal whereas 65%~70% is normal. Changing the setting of the millstones and conditioning the wheat before milling has improved the yield considerably. 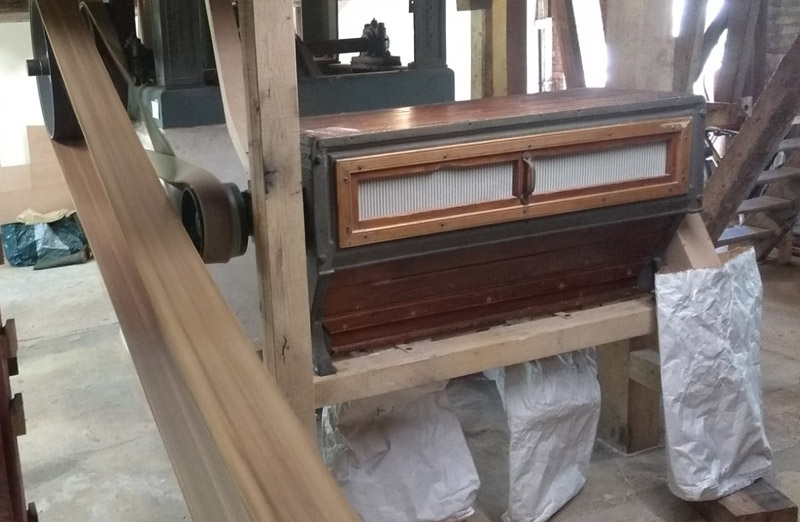